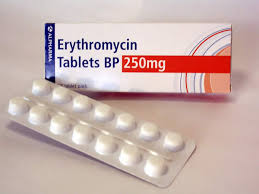 In 2002 a study in Sweden was conducted to see if a drug, Erythromycin would help improve the stomach emptying rate in patients with Myotonic Dystrophy. This study looked at 10 patients… here are a few key details:

The study showed that the drug erythromycin did not improve stomach emptying time but did help the majority of patients with diarrhea. In general the patients thought this drug improved their condition.

“Nevertheless, in general the patients
considered the treatment effective. This could be explained
by possible effects of the drugs on parts of the gastrointestinal
tract other than the stomach [15,16] due to the widespread
involvement of the gastrointestinal tract in MD
[9,17]. This assumption gains support in our study from the
fact that six out of 10 patients experienced reduced
symptoms of diarrhoea.”

Dr. Nakamori in his study of Erythromycin in reducing the RNA toxicity in MIce thought that this conclusion might come from:

“Erythromycin is also reported to stimulate gastrointestinal
motor activity via effects on motilin receptors.35
In a previous study, the erythromycin ethylsuccinate ester was tested to improve gastric emptying in DM1 patients when administered at a dose of 50–200 mg/day
for 4 weeks.36 While no significant change in the gastric
emptying rate was observed in the study, some gastrointestinal
symptoms, including nausea, ability to eat,
and diarrhea, were attenuated in DM1 patients.
Although the dosage of erythromycin was relatively low
and skeletal muscle symptoms were not evaluated, such
improvements might have occurred through neutralization
of toxic RNA.”