There is still lots of interest in finding a cure for myotonic dystrophy through oligonucleotides. These are small molecules different than oral ingestion of a pill. Lots of interest in this type of therapy. Here is a press release from bioworld

Lilly’s ‘Avidity’ for oligos pays off for Calif.-based company

Eli Lilly and Co. has agreed to pay privately held Avidity Biosciences LLC $20 million up front and up to $405 million per target to support development of an unspecified number of new antibody oligonucleotide conjugates for immunology and other indications. The multiyear deal, which also includes a $15 million equity investment for Avidity, opens a new front in Lilly’s embrace of oligonucleotide-based drugs, the subject of earlier deals it has struck with Dicerna Pharmaceuticals Inc., Ionis Pharmaceuticals Inc. and Noxxon Pharma AG.

Avidity’s platform, which can leverage transferrin and other transporters to deliver oligonucleotides into multiple tissue types, will allow Lilly to reach beyond hepatocytes — the most accessible domain for such medicines so far — to muscle, heart, tumor and immune cells. Andrew Adams, Lilly’s chief scientific officer for RNA therapeutics, called it “a promising avenue of research toward development of new RNA-based medicines.” With Lilly’s own multimillion-dollar R&D center just up the road from Avidity’s La Jolla, Calif., headquarters, the big pharma company’s scientists won’t even have to drive far.

Arthur Levin, Avidity’s head of R&D, told BioWorld the deal “demonstrates that the technology for oligonucleotides has reached the level of maturity where pharma is jumping back in” while validating Avidity’s technology, too. “The field has made great strides recently using targeted approaches to deliver to hepatocytes. Our technology allows us to deliver oligonucleotide payloads to cells outside of simply hepatocytes, and that’s what attracted Lilly,” he said.

The company also brings expertise in what Kent Hawryluk, Avidity’s chief business officer, told BioWorld are some of “the devilish technical details” that would make it difficult for someone to replicate its approach.

“Each one of the components, the antibody, the conjugation to the antibody, the linker, the nature of the payload, the arrangement of the molecules in space… each one of those is important to optimize,” said Levin. “If you just go in and slap an oligonucleotide payload onto an antibody, you’re probably not going to get the results that we get. That’s where the secret sauce lies, in that combination of making the appropriate modifications to each one of those systems,” he said.

The global licensing and R&D agreement with Lilly is the company’s first strategic deal and will provide it not only with support for the partnered candidate, but with nondilutive funding to help advance its muscle-focused internal pipeline.

“It turns out that muscle cells are particularly sensitive to molecules transported in on the transferrin receptor and that’s why we’ve concentrated our lead programs on muscle,” said Levin.

Founded as Avidity Nanomedicines in 2013, the company tweaked its name to reflect that its approach could do more than just deliver siRNAs, an early focus of Avidity Nanomedicines. Today, its lead internal program is focused on myotonic dystrophy type 1, a disease caused by the expansion of CTG repeats in the DMPK gene. Following humanization of an anti-human transferrin receptor antibody, Avidity team members on the project are now working to optimize its siRNA payload. “We’re in the process of scaling up the antibody and moving forward with respect to development in the very near future,” said Levin.

Avidity is also applying its antibody oligonucleotide conjugate technology to Duchenne muscular dystrophy (DMD) where the company said its approach has proved 100-fold more potent than existing oligonucleotide therapies for DMD in a mouse model of the disease, a feat it hopes will allow for reduced dose levels and reduced dosing frequency. In October, the company received an undisclosed equity investment from Cureduchenne to help advance preclinical development of its exon-skipping oligonucleotides for DMD. 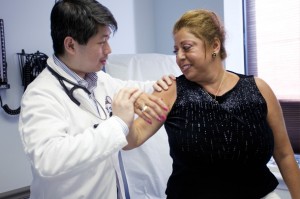 Recent information came to light that Ionis is still continuing pursue a drug for myotonic dystrophy. The first trial ended and was not successful. What we learned is that the team was impressed that progress was made. Rather than pursue this initial drug they may be switching to a new more highly improved drug. This makes sense as the cost to pursue a drug is high $$$$ and you want your best candidate forward.

The IDMC meeting will be in San Fransisco this year. Make plans to attend the scientific sessions  or the meeting of the Myotonic Dystrophy foundation

Please save September 5th – 9th, 2017 for the IDMC-11 conference being held in San Francisco, California. If you are interested in receiving updates about IDMC-11, please sign up online at www.idmc11.org.

Welcome to the IDMC website, home of the International Myotonic Dystrophy Consortium (IDMC, or International Dystrophia Myotonica Consortia). This site is dedicated to the community of scientists, physicians and health care providers who have taken up the fight against Myotonic Dystrophy, a progressive neuromuscular disease that effects people and families around the world.

Encinitas, CA Two recent published studies reviewed the use of FDA approved drugs in Mice that reversed some myotonic dystrophy symptoms.  The mice showed improvement in muscle strength after a regime of using these approved rugs in appropriate dosages.

My son Chris has Congential Myotonic Dystrophy with a repeat count of about 1700. He is severely affected being non-verbal, cognitive delays, autistic spectrum disorder, and some muscle involvement. Chris also has the adult form of the disease as he reached puberty and has a level 1 heartblock, excessive sleepiness and other adult symptoms.

He has had 3 bouts of respiratory collapse. This initially involved a Hospital Stay, MSRA pneumonia. Within a very short period of time of initial symptoms he was in the ICU on a respirator and full dosages of heavy antibiotics including vancomycin. Recovery was uncertain and very slow. Tracheotomy was performed as weaning from the respiratory was difficult and dangerous. Full recovery was accomplished at 120 days. USA Hospital costs was approximately $750,000 for this. Two other bouts of respiratory collapse related to pneumonia occurred with similar outcomes.

We decided to pursue an experimental course of treatment with these FDA approved drugs due to concerns that he might not survive another bout of respiratory collapse.

In May 2016 we added a daily dose of 80 Mg of Ketoprophen as this drug was found to have a positive effect on mice as well in ameliorating the myotonic dystrophy symptoms.

Results: We did not use any formal metrics in evaluating the results of the trials. The main reporting point was discussions with caregivers to see if there was any improvement in cognitive or strength related improvement in the patient. These conversations were all convergent in :

Overall the results of this 8 month trial did not replicated the information in the two mice studies. There was no increased muscle strength noted by caregivers. There did seem to be a significant improvement in clearing secretions in the lungs which is a critical factor in this patients Quality of Life (QOL). No Pneumonia infections were reported. this is a significant improvement over the last 12 months.

Discussion: Overall it appears that this therapy may have had an positive  impact on the patient. Overall the results of this one case did not replicate the studies that used mice in terms of improvements in muscle strength. this may be due to a number of reasons including dosing strength. It could also be that the mice that are created to have myotonic dystrophy are not the ideal method to test drugs the the DM in these mice may be more susceptible to disruption that the actual DM gene in human patients.

Patients with Congenital Myotonic Dystrophy and certain other patients (older than 57) are currently excluded from clinical new drug trials. Myotonic Dystrophy is slowly progressive until an exponential event occurs. Because of the risk of sudden death and pneumonia with these cases is ongoing looking for alternatives to reduce risk of death may be warranted by patients health care team.

Another paper has been published and revealed another potential treatment for myotonic dystrophy, Phenylbutazone PBZ.. Interestingly this study was also done in Japan………… now a hotbed of repositioning drugs for treatment of myotonic dystrophy.   some info from the study

This summary above  showed that in mice this drug helped mice with myotonic dystrophy run on the wheel better and had better grip strength. More info below

PBZ is an NSAID with anti-inflammatory, antipyretic, and analgesic activities. PBZ was approved in humans for rheumatoid arthritis and gout in 1949. Although incidental adverse effects of fatal liver disease and aplastic anemia markedly lowered the use of PBZ, PBZ is still used as an alternative drug for ankylosing spondylitis32,33.
Interestingly, another NSAID, ketoprofen has been reported to suppress CUG-induced lethality in Drosophila34, and we also found that 50 μ M ketoprofen upregulated the expression of Mbnl1 mRNA 1.2-fold in C2C12 cells, which was lower than the 1.3-fold increase of Mbnl1 mRNA by 50 μ M PBZ (Supplementary Fig. S6). Ketoprofen
and some other NSAIDs may have beneficial effects on a mouse model of DM1, as well as on DM1 patients.