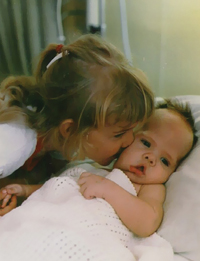 For a while after Dustin died, I lived a pretty normal life. I went to college on a softball scholarship, dated my future husband, carried an almost perfect GPA, and wrote about my brother, trying to share how he shaped my life. Before getting married, I had a genetic test for myotonic dystrophy, which came back negative. I was going to have the chance to raise a normal family — a chance my mother only thought she had.

From my brother to my mother

I knew my mother, Jo Lyn, also had myotonic dystrophy. I knew when she shook someone’s hand, she couldn’t fully release her grip unassisted. I knew that for the last 10 years or so of her life, she couldn’t open jars. I knew she walked more slowly, her leg swelled, her endurance shortened, and one day she would need a wheelchair. I knew she enjoyed her job at the Wal-Mart — until she switched stations, no longer had a chair and had to stand long hours on the job. I thought she quit because she wasn’t tough, maybe even lazy, or because she didn’t speak up well enough to get a chair. I worried about getting new basketball shoes when my mother no longer worked because her legs hurt too much.

She’d come to softball games and not be able to climb the bleachers, so she’d bring a lawn chair and sit away from all the other parents. Once, when she tried to work again, she fell asleep as a paraprofessional in a grade school class and never got called back.

As a teacher, I tried to be gentle with my mom, but I told her she’d have to will herself to pay attention, try to find ways to stay awake and prepare better by getting more sleep. There were a lot of times I thought my mom wasn’t trying hard enough, or was too concerned about resting, or that she should choose not to be so sad.

My brother Dustin had been obviously handicapped. I was told before I met him that I would live longer than him. I knew to cherish every day with my brother and that, as his healthy sister, it was naturally my job to help take care of him.

My mother was once very capable, beautiful and vivacious. Her illness crept up in small increments. She was losing muscle strength; I thought a lot of it was mindset and effort, that she could will herself into being the woman who rode bikes with me when I was 10. When my mother ended up in the hospital unable to breathe on her own, I felt blindsided. My mother was going to live with us, help me be a good mother, and watch my son, Eli, while I worked. Looking back, the signs of her disease were obvious, but living through it, I often thought my mother needed to toughen up. I gave advice about perspective and will, choosing pragmatic advice over empathy or true compassion.

Our small-town doctor had never heard of her rare disease. When he said, “If she has myotonic dystrophy, I don’t know there is much we can do,” I knew it wasn’t my mother’s lack of willpower that put her in the hospital. I had known so much about Dustin’s congenital myotonic dystrophy, and paid so little attention to my mother’s adult-onset form. Myotonic dystrophy affects the IQ over time, slurs speech, creates hypersomnia and apathy — all signs my mother had. So many things my mother did I wished she would just “change her mind” about. She couldn’t just change her mind. Her genetics carried a degenerative muscle disease.

Love is stronger than willpower

Willpower doesn’t change everything. We can’t be just anything we want to be. My mother couldn’t will herself to be like she was when she was 30 or 40. She couldn’t choose to be normal — her muscles were degenerating.

My lessons from my mother’s life are many, but one that stings the most and the one I want to imbue in my heart is to not judge people negatively by how they act, even if they look normal, or have been normal in your past, because you never know what they have to fight inside — something they never chose to have.

The answer to Dustin walking was not willpower. He was not born to walk, and while trying made us better people, more practice wasn’t the answer — compassion was. The answer to the feeling that I was losing my mother slowly over the years was not to try to motivate her into a new perspective to magically fix all the problems — it was love.

As painful as some of the moments were, I thank God for my time with my mother while she was on a ventilator in long-term critical care. My heart knew she couldn’t get better, I couldn’t will it, and all my prayers were “Thy will be done.” I took joy in washing her hair and felt honored to comb it.

It took until the end of her life for me to cherish each day with my mother the way I naturally did with my brother. At the end, I loved my mother simply, without request to do better in any way, or be more capable in any way. I simply loved that she was there, and she was my mother.

Darcy Leech teaches high school AP English in Salina, Kan. She is writing From My Mother, a memoir on losing her mother and brother to myotonic muscular dystrophy, from which this is excerpted. She lives with her husband, Daniel, and their 2-year-old son, Eli. She enjoys softball, strategy board games and writing for healing.

1 thought on “New Book about a Family with Myotonic Dystrophy”