Myotonic dystrophy is characterised by a wasting and weakness of muscles in the arms and legs. The face often develops a mask-like expression, typically with eye drooping (ptosis), though symptoms can vary considerably. A number of historical figures may have been affected by this disease. 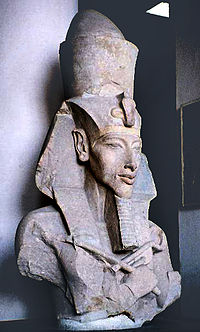 It has been suggested that the pharaoh Akhenaton, of the Eighteenth dynasty of Egypt, had MD. Reigning from around 1350 BC artistic representations of him portray a strikingly bizarre appearance, with a long face, thin and hollow cheeks, a half-open mouth and lowered eyelids known as ptosis.

Another  symptom of myotonic dystrophy are the development of cataracts. Interestingly, a late relative of Claude Monet when presenting with cataracts, also

to mild muscle weakness, was found to have a myotonic dystrophy mutation, leading one to suspect the cataracts of Monet himself may well have been a manifestation of this disease.

The Greek military commander and national hero Alexander Ypsilantis (1792-1828) has been suggested to have suffered from myotonic dystrophy. His portrait on a stamp 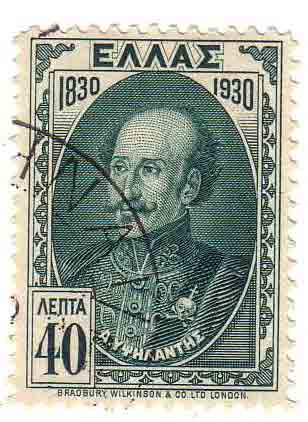 shows drooping eyelids, severe weakness and atrophy of the face muscles. His younger brother Demetrious, also a hero in the struggle for independence against the Turks, suffered from the similar ailment as well as other brothers and ancestors of his.