Many of us in the Myotonic Dystrophy World find that among the most significant factors affecting us are related to brain function. Depression, Lack of Motivation, Apathy, Indifference, and Loss of executive function makes living much less tolerable. In a nutshell these changes create Terrible problems socially and emotionally. Now researchers have identified the issue that they think causes the disease. The good news is that the mechanism for the brain looks like the mechanism for many of the other issues as well. It’s the same as for muscle and other tissues. So if a cure is found in the future it will not just help with heart and muscle it may help with the most devastating issues that of the Brain as well. At the Recent MDF conference in San Fransisco one potential therapy in early stages may work not only in muscle but if injected into the Spinal fluid might help with brain issues.

Note that this research is on the individual cells in the brain. People who have changes in the brain such as enlarged ventricles or lots of white matter are most likely a different issue. The researchers do not know if drugs or other therapies can change these structural problems in the future.

Here is the article from the Sun-Sentinal 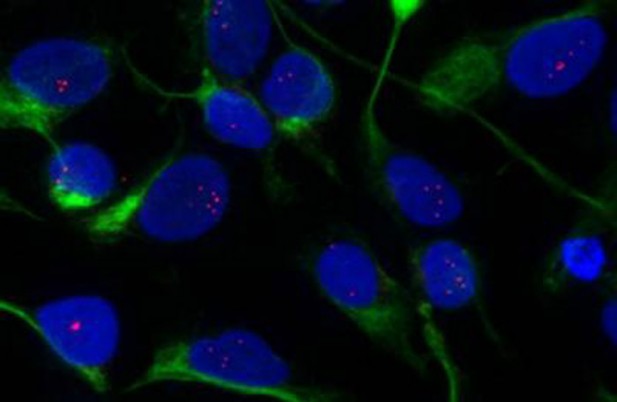 Image Caption: The red dots are the toxic RNAs accumulating in the nucleus (blue) of a myotonic dystrophy cell and the green is a neuronal marker. Credit: Charizanis et al., Neuron. The red dots show how the cells get clogged.
redOrbit (http://s.tt/1kk1v)

University of Florida researchers have identified a gene responsible for brain-related symptoms of the most common form of adult-onset muscular dystrophy.

Disruption in the gene’s function is linked to memory loss, learning difficulties and extreme daytime sleepiness. The gene produces a brain protein previously thought to be of no importance in the disease myotonic dystrophy, which causes muscle weakness and disturbs electrical signals in the heart.

The findings appear Aug. 8 in the journal Neuron.

“Now we understand one of the major events that occurs in the brain of someone with myotonic dystrophy,” said senior author Maurice Swanson, Ph.D., a professor of molecular genetics and microbiology and a member of the UF Genetics Institute. “We know that the same patterns of gene expression activity that occur in skeletal muscle and the heart are also happening in the brain, and we have a disease model that we can study to understand more.”

Myotonic dystrophy usually strikes people in their 20s or 30s, causing increased muscle loss over time. Other symptoms include impaired brain function and sleep difficulties. The disease, which can be life-threatening, affects about one in 8,000 people in the general population, according to the National Institutes of Health.

The disease is caused when a section of DNA repeats excessively. As a result, the genetic material responsible for copying that DNA pattern and serving as a blueprint for protein production can be up to 450 times longer than normal. The abnormal repeated sections of genetic material become longer and longer in succeeding generations, causing the disease to become worse and worse from generation to generation.

Patients start getting muscle symptoms when the extra-long pieces of protein blueprint, called messenger RNA, loop back on themselves, forming hairpin-like structures that bind to and disrupt the function of a key protein called muscleblind-like protein 1. That protein controls a process called splicing, in which chunks of the RNA are cut and rejoined in differing patterns to produce the variety of proteins needed for development. By hindering this process, the abnormal RNA prevents the conversion of fetal muscle to adult muscle as people age.

But Swanson and colleagues were unsure what related processes occurred in the brain. They started investigating the cause of brain-related symptoms after talking with patients, who explained that those issues were of most immediate concern.

“We were surprised, because we realized we weren’t attacking a major problem that concerned people affected by this disease,” Swanson said.

To try to unravel the mystery of how the disease works in the brain, Swanson and colleagues looked to a brain protein similar to the one responsible for the disease symptoms in muscle. They studied both behavioral and molecular-level changes in mice lacking the gene that produces a protein called muscleblind-like protein 2, which is analogous to the muscleblind-like protein 1 that causes muscle symptoms in humans.

Without the protein, the mice developed several of the brain-based symptoms that occur in patients who have myotonic dystrophy. On the molecular level, the mice had abnormal levels of brain chemicals that help to regulate thought processes. In addition, the connections between nerve cells in the brain’s memory center did not respond well to changes in stimuli.

The researchers found for the first time that, underlying those conditions, at hundreds of points within the genetic blueprint there was disruption of the cutting and rejoining process that creates protein variety. Together, the findings suggest that the brain-related symptoms of myotonic dystrophy result from disruptions in the function of the gene that produces muscleblind-like protein 2.

“This is really new information,” said Thomas Cooper, M.D., the S. Donald Greenberg professor of pathology and professor of molecular and cellular biology at Baylor College of Medicine, who was not involved in the study. “Before, this gene was thought not to be so important, so in people’s minds it was put on the back burner. This study showed that if you do a good analysis you can find that it is very important in the brain.”

The molecular missteps that disrupt brain function in the most common form of adult-onset muscular dystrophy have been revealed in a new study published by Cell Press. Myotonic dystrophy is marked by progressive muscle wasting and weakness, as well as excessive daytime sleepiness, memory problems,…